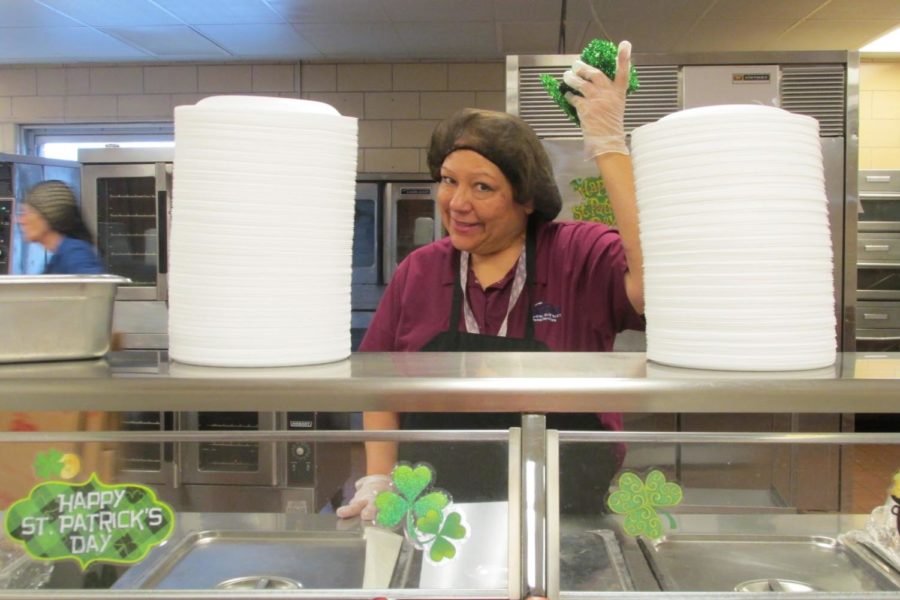 Before becoming a kitchen manager, she started her career as a receptionist, then moved up to be an accountant for a long time and because of the supervisor she had he taught her a lot and she was able to do accounting without a degree. Due to the long hours and not being able to be home as much as she wanted, she decided to try working in a school kitchen since she had experience being in the food industry when she was younger. She started working at Esperanza Elementary, but after three months, she was transferred to Mana Academy Charter School.

In January she was again transferred to Kearns High School. It is easy for Christine to work in schools because when asked how she likes working with the students she stated “I love teenagers, they’re good kids and the kids at Kearns High are very friendly on the most part, most of them are very polite. it’s amazing how well-mannered they are to us.” Reflecting on the fact she gets along with a lot of the students it is easy for the students to talk to her. She states that “the lunch room is a safe space for the students. It is where the students can come and socialize with each other and just relax from the stress of class.” she helps maintain the kitchen/lunchroom for the students to have a place where they could go to get away. Most people wouldn’t see it in that way, but she is hero that isn’t recognized enough in the community, like a lot of other kitchen staff workers in high schools.

When being asked how it affects her everyday life she replies saying, “waking up so early was an adaptive thing, because generally I’m a night person, but other than that it hasn’t been tough on me. It’s just learning new things.”

So, from being at the school at 5:45 till 3:00 Christine does an amazing job in the Kearns High School kitchen and will always be very appreciated by the students.