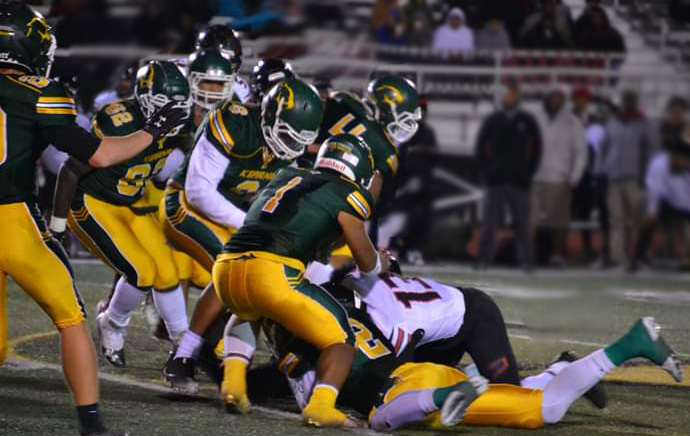 Kearns- October 11, as Homecoming festivities continue the Cougars gear up to face and ultimately defeat the West High school Panthers. The Cougars home stadium was packed full of students, parents, homecoming royalty and even graduated SBO’s and Alumni alike.
The game had a quick start to it as Joe Alusa (#27) is quick with the first touchdown of the game. After that play the West Panther number 13 quickly rebuttals earning the panthers a touchdown and a field goal in the third play only six minutes into the first quarter, Cougars 6 Panthers 7.
The competition between West and Kearns is preparing to be a good, but not easy, homecoming game. West tries for a run as (#38) ruins it with a glorious tackle as the ref’s throw the first of many yellow flags earing Kearns a Five-yard penalty.
Jeffrey Bassa, number 5, takes the ball for an attempt to run it as he’s taken down by Isaac Luckart (#13) only for Bassa to juke him out during the next play and running all the way from the 30-yard line to another touchdown for the Cougars, hiking the score up to Cougars 13 Panthers 7 as the Cougars make second down after making a field goal
As the game is still in only 1st quarter tension rises, and a riveting game is truly started as Kearns is on defense as they are cheered on by the immersed crowd. Dakota Lynde (#10) with a good pass as number 56 is pushed out of bounds.
As quarter 2 starts Jeffrey Bassa is quick to make another flawless run earning the Cougars another touchdown as Isaiah Afatasi makes a 26-yard run. Cougars 19 Panthers 7.
The crowd gets louder as our Cougars set up their plays perfectly to beat the Panthers. Dakota Lynde (#10) makes a three-yard pass to Jack Kelly(#17) as it’s intercepted by the Panthers (#74) wows the crowd as he rolls over Panther (#63).
The third quarter of the game was by far the most stand off point in the whole game both the Cougars and the Panthers had a tough time making it to the end zone completely. Panther Abraham Williams makes a 2-yard run and scoring a touchdown Panthers 14 Kearns 19
This is where the Cougars really rock the house, getting as close as the 20-yard line until the Panthers push them back while the same is done to the Panthers. West panthers brought us a very entertaining homecoming game as the panthers put up a tough defense. The cougars keep the panthers at the 40-yard line for the rest of the third quarter.
As the final quarter starts with Cougars Jack Kelly making a successful 32-yard pass from Dakota Lynde. With six minutes left in the last quarter Kearns 25-West 14 at first down. At this point the cougars have the game in the bag but doesn’t get boring as the Panthers refuse to give up even as Kearns makes a field goal bumping the score up to 27 Kearns, Panthers 14. Until Panther, Clarence Butler, makes a 22-yard pass from Abraham Williams and runs it to the End zone. Panthers 20 Kearns 27 only winning by a touchdown and an extra point.