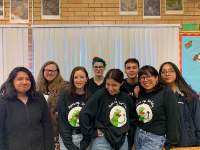 the state competition. Due to the cancellation of school as well as large events, the slam poetry

happening, but instead of live performances videos will be submitted.

Amanda Hurd, the advisor of the Kearns High Slam Poetry Team, has come up with a

way to keep the poetry performance practice going via an app called Zoom. Zoom is an online

conferencing app that allows online video calls with up to 100 people. Through this app,

before the qualifiers. She also hopes to invite other schools’ slam poetry teams to the Zoom open

The Cougar Claw had the opportunity to speak to Amanda Hurd. When asked why it is so

important to her that the poets continue their performances she had this to say, “The poets have

been working hard and we have some great poems to share. I am so proud of my team; every

poet on the team is new this year and they have progressed tremendously over the school year.

about their lives and our society. I feel that now – as everyone is distanced and lives changed

they need that expressive outlet more than ever. Many of the poets consider the team a support

system in their lives, and their poems can help them process these difficult and complicated

times. I don’t want to take that away from them when it is so needed right now.”

The Cougar Claw also had the opportunity to speak to Natalee Williams, a member of the

Natalee Williams, a senior at Kearns High and the acting Team Captain of the poetry team,

had this to say, “I think continuing poetry practice through Zoom is the best option we could

have, as far as performance goes.”  Natalee continued with, “I think having open mics with other

schools over Zoom is a good idea. I believe it could foster a more friendly and open community

among these young writers, and give them a group of people to fall back on for support.”

had this to say, “Having poetry as my outlet during difficult times such as these has allowed me

to better understand the emotions I feel as well as how I deal with them. I have been able to

really connect with myself through my writing, and have learned more about myself than I ever

team at Kearns High will continue their competition, open mics, and writing new poetry with the

help of technology. Through this, the poetry team demonstrates that in uncertain times art keeps

Members of the  Kearns High Slam Poetry Team pose for a photo, photographed by