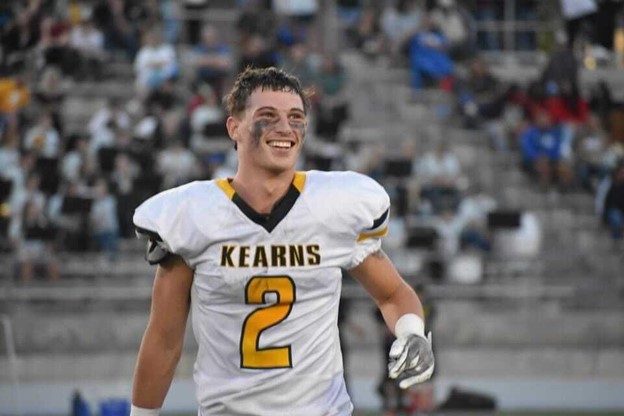 There is no “me” in Dominic Thornton when it comes to the team. Dominic Thornton is the free safety and wide receiver. He plays both defense and offense. He’s a varsity player with a record of 46 solo tackles, 59 total tackles, he’s had an average of 4.5 tackles per game, 3 interceptions and 2 blocked field goals throughout his high school football experience. His teammates and coach can agree that Dominic Thornton deserves this recognition.
What’s Football MVP of the month? A football MVP is an individual who stands out from the rest when they work hard for their own success and the team’s success. This individual has a game changing attitude. He practices hard, plays hard and works hard. MVP of the month of October 2021 is Dominic Thornton.
“My name is
Dominic Thornton. I’m a senior and I’ve been playing football for pretty much my whole life. I play football for the love and passion of the game. I play for my dreams; I’ve dreamed of playing in a college stadium one day. But right now, I’m playing for my grandma Wendy and papa George that’s who I’ve dedicated my senior season to.”
Dominic was described as a leader on and off the field. He can control the team and keep them in order. He has an active effort towards helping the team. He helps the coach set the tone of the game. No matter what the circumstance of the game is, he keeps the team going. His active effort helps keep the team motivated and ready to work hard.
Coach Rickards said that Dominic Thornton deserves to be MVP because, “His effort and attitude have been outstanding. He’s shown great leadership. He does whatever he can to help the team. “ Ivan Kaufusi said, “Dominic Thornton is the definition of elite effort.” He leads the team and only does what is good for the team. Jt described Dominic as a “Great person and a great leader.”